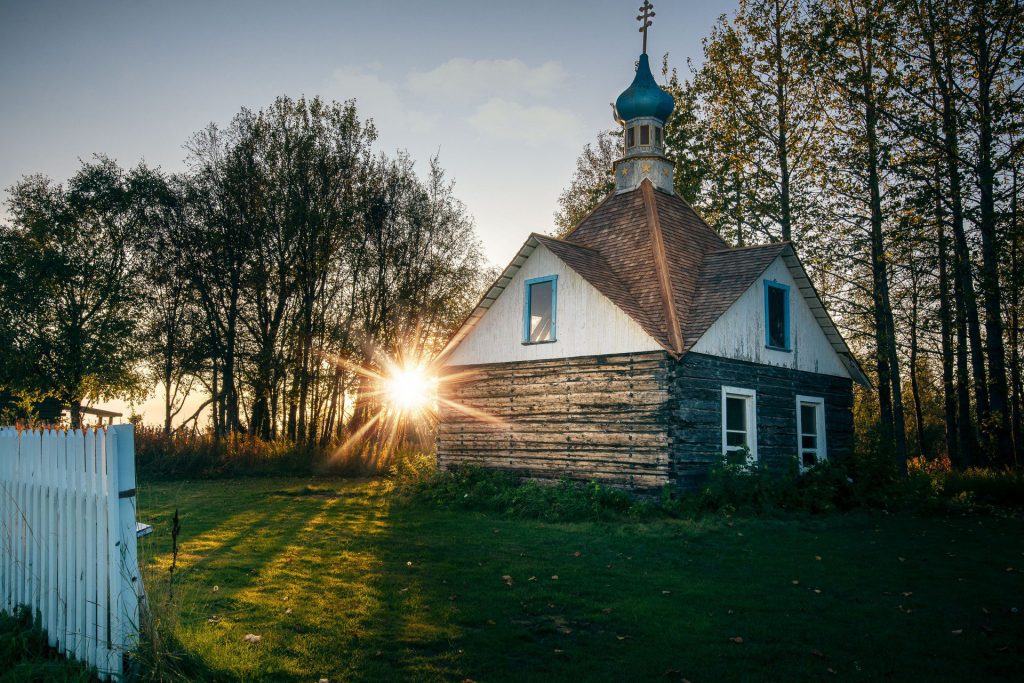 The City of Kenai has plenty of natural wonders and wildlife, but behind all the beauty lies a community that is rich in history and cultural assets. If you’re a history buff or simply curious to learn more about this Alaskan city, meander through Old Town Kenai to discover its unique hidden gems and what made Kenai the thriving coastal town it is today.

From its origins as one of the original village sites of the Dena’ina people, to the Russian  presence, and 20th Century influences, Old Town Kenai does not fall short of historic charm. Take a look at the eight things we’ve compiled worth exploring in Old town Kenai.

Begin your Old Town journey at the Kenai Chamber of Commerce and Visitor Center. Home of the Kenai Cultural Exhibit, the 10,000 square foot facility displays a collection of historical, cultural, and wildlife artifacts on the outskirts of Old Town Kenai.

At the end of your visit, explore the array of Kenai’s signature clothing, gift items, and reference materials. Don’t forget to grab a map on your way out to assist in the remainder of your Old Town self-guided tour.

Learn how influential Russian fur traders were in the history of Old Town Kenai at the quaint, Holy Assumption Orthodox Church. Built in 1894, this National Historic Landmark is the oldest Orthodox Church on mainland Alaska. The well-preserved site is still used for regular services to this day.

As one of the most highly recognized structures on the Kenai Peninsula, the St. Nicholas Chapel was built in 1906 as a tribute to Igumen Nikokai. With the aid of his two assistants, Father Nikolai was responsible for bringing the smallpox vaccination to the Kenai Peninsula. Located in the northwest corner of the Russian Fur Trading Post of Fort St. Nicholas, today, the chapel is used for memorial services and its annual Thanksgiving service on December 19– St. Nicholas Day.

Believed to be the oldest original building on the Kenai Peninsula, the Parish House Rectory is home to the priest of the Russian Orthodox Church. Built in 1881, The Rectory is situated adjacent to the Russion Orthodox Church and houses the oldest piece of non-native art in Kenai, the copy of the 400-year-old Our Lady of Kazan.

To experience a replica of the military fort where more than 100 soldiers of the American Civil War were stationed, visit Fort Kenay. Originally constructed in 1869 by the U.S. army and reconstructed in 1967 as part of the Alaska Centennial celebrations, this series of barracks was abandoned after just 17 months when the soldiers were sent back to assist in the quelling of an Indian uprising.

What is now known as the Kenai Fine Arts Center, used to be Kenai’s Firehall and Jail built in 1955. Operating for almost 20 more years, the Kenai Police and Fire Departments moved to their new facility in 1973. Since then, it’s been renovated into a gallery which displays local artwork including painting, drawings, clay sculptures, and more. For current hours and exhibits, visit their website today.

Named after John Hedberg, a Kenai resident in the early 1900s, Moosemeat John was given the nickname for hunting moose to feed his thirteen children. At the corner of Main Street and Overland, the building was the office of the Chamber of Commerce since 1975. In 2012, the Chamber merged with the Convention and Visitors Bureau and moved into the Kenai Visitor and Cultural Center.

Recently restored by members of the Kenai Historical Society, Kenai Cabin Park consists of 5 historical cabins which contain memorabilia of historical significance. Located on a city-owned lot in Old Town Kenai, the Kenai Historic Cabin Park was established to preserve the village era of Kenai history, with all cabins nearing 100 years in age.

The park is open to the public during summer months, offering tours, free of charge.