12 Reasons Kenai Is Your Next Winter Destination 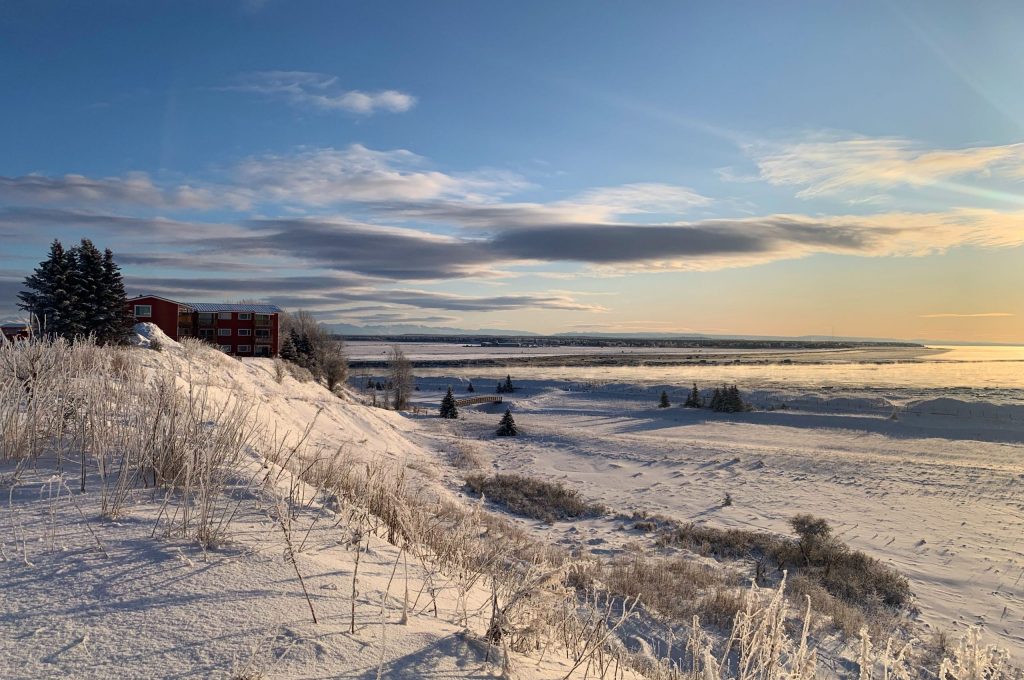 Winter in the city of Kenai is a wonderland of picturesque surroundings, wildlife sightings, and glistening snow in an Alaskan paradise.

While summers in Kenai are known for sportfishing and outdoor adventure, the coldest months of the year are enthralling for the lack of crowds and variety of winter activities unavailable in other cold weather destinations.

Here are 12 things to do in Kenai during the winter months.

With over 200 acres of trails, picnic areas, gardens and more, no trip to Kenai is ever complete without taking a stroll through one of the city’s 11 park options.

Kenai’s newest addition, Daubenspeck Family Park at 296 Marathon Road, is the perfect park for winter travelers. Not only does the park offer cross-country skiing trails, but the ice skating rink is hot-mopped and smoothed over, making it one of Kenai’s greatest winter attractions for the entire family.

Take in the Views of the Four Sleeping Giants

Join the locals at the city’s favorite “lunch spot”: The Scenic Bluff Overlook. Just a few steps from Old Town, the park is a spectacular setting to take in magnificent views of the Kenai River and beautiful ice flows that drift toward the ocean.

But what might be the ultimate view from Kenai’s overlook is the Four Sleeping Giants across; otherwise known as Mt. Iliamana, Mt. Redoubt, Mt. Spur and Mount Augustine. These majestic mountains in the distance are a set of volcanoes which sit about 75 miles across the Cook Inlet from the city of Kenai.

During the summer, this Alaskan State Recreation Site is known for witnessing the annual migration of Pacific Salmon species, including king salmon, sockeye salmon (red), coho salmon (silver), and pink salmon. But that isn’t the only to look out for while you’re at the Kenai River Flats. The abundant productivity also makes it an ideal home for a variety of bird species and Alaskan wildlife, even in the winter.

Another new addition to the City of Kenai’s Park and Recreation department is the Nordic Ski Trails located at the Kenai Golf Course at 1500 Lawton Drive. The trails are groomed for cross country skiing and prohibit the use of motorized equipment. Cross country skiing teams and nature lovers spend their time enjoying the stunning winter scenery of the golf course.

Alaskan wildlife, including moose, caribou, eagles, ducks, coyotes, and an occasional bear, may be seen around the edges of the large natural area. It’s also an ideal environment for snowshoe hiking or winter hiking along the trails.

Bundle up and head to Cooper Landing for some epic hiking trails. There are plenty of trails to choose from but if you want to get some jaw-dropping views of Kenai, head to the Skilak Lake Overlook. This 5-mile round-trip trail is a moderate hike that is easily accessible and delivers gorgeous views of the Kenai River and Chugach Mountains.

If you have yet to experience snowshoeing, you’re in for a real Alaskan treat. The Kenai National Wildlife Refuge is a 150-million acre network of lands and waters set aside to help conserve our nation’s fish and wildlife heritage. Located within the refuge are easy trails suitable for families and beginners alike. Enjoy the beautiful views of the ice covered lake throughout the 2.6 miles of the Keen Eye Nature Trail and Centennial Trail.

Ice Fishing on One of Kenai’s Stocked Lakes

If you consider yourself an extreme outdoorsman or woman, head to Skilak Lake, but with caution. Ice conditions are extremely variable from year to year and any travel on the ice is at your own risk. If you happen to visit in a year with enough ice, the fishing can be exceptional. The lake gives winter anglers the opportunity to catch multiple fish such as rainbow trout, Dollies, and stocked landlocked salmon.

ice hockey team joined the NAHL as an expansion team back in the 2007-08 season, and has since then added team facilities to the 2,000+ capacity Soldotna Sports Center, where they call home.

Play a Game of Racquetball at the Kenai Rec Center

While we encourage you to embrace Alaska’s winter out in the wild, warm up and take some time for a game or two of racquetball inside the Kenai Recreation Center. The facility also provides basketball, sauna, volleyball, gymnasium, and more!

Shoot Skeet on Sundays at the Snowshoe Gun Club

As one of the oldest shooting facilities in Alaska, Snowshoe Gun Club is a non-profit shooting and recreation club for members-only. The club includes 4 clay fields which are open to members and non-members on Sundays from noon to 3:00pm.

Fat tire biking is one of the best ways for travelers to get out and play in the snow while discovering and admiring the beauty around them, and Kenai Beach is the ideal setting. They meant it when they said these bikes were made for all kinds of terrain, which is why it’s still an effective way to enjoy a winter adventure in Kenai. Quick Tip: Wear layers and don’t forget your gloves!

In 2017, the Kenai National Wildlife Refuge opened new areas to snowmachine use between December 1 and April 30, creating even more wide open spaces, frozen lakes, and wooded trails to partake in this favorite Alaskan winter activity. While there are many places throughout the state where snow machines are permitted, be mindful of all posted rules and restricted areas.